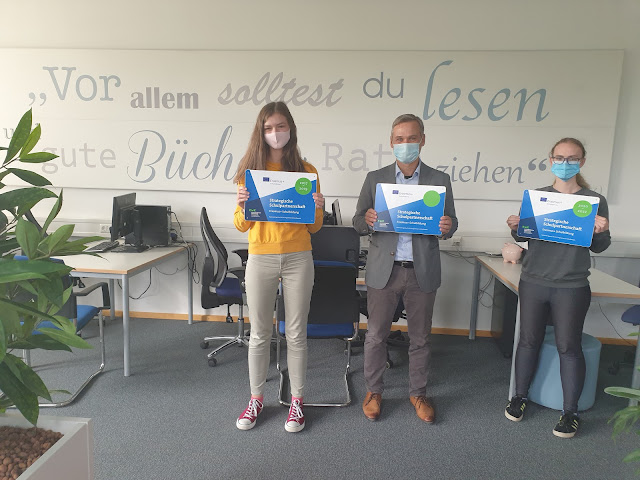 Erasmus+-projects can create a long-lasting identification with its ideas, values and the experiences we can make throughout the program. It is fantastic that former Erasmus+-participants still give support long after their own involvement in the project. For the commitment they have given they received a voucher from the local bookshop. Thanks a lot, ladies!!!
Post a comment
Read more

Library: New literature on WWI thanks to the Erasmus+-project "To Hell and Back" 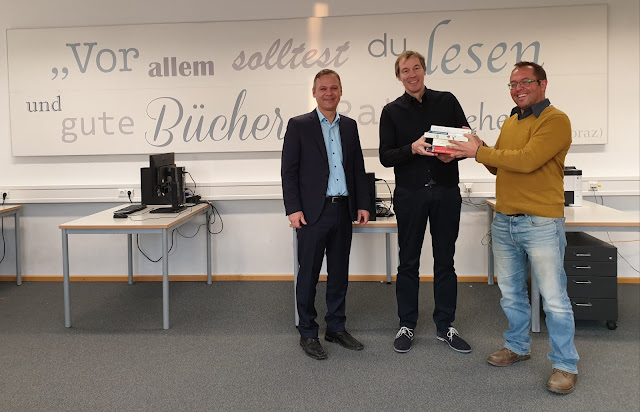 Thanks to the Erasmus+ project our school has received a number of modern, academic books on WWI and sources of research for students as well as teachers. Mr. Schweizer, Coordinator of the Erasmus+-project, is handing over the books to Mr. Görtler, the Head of the History Department, and Mr. Pfaffendorf, the Headmaster.
Post a comment
Read more

Final event: A night at the ... LeWaZi movies After lots of work, two exciting trips to France and Italy, and many, many more experiences the Erasmus+-project ended as it had begun two years before: at the movies. This time our location was a special one, as we had the opportunity to use the premises of the LeWaZi on our campus, a fantastic event organised every second year at the end of July by teachers and pupils of the Leonhard-Wagner-Schulen. The pupils who participated in the "Geschichtswettbewerb des Bundespräsidenten" were also given their certificates as well as some little presents for their work, contribution and support in the past two years. Then a last trip back into the hell of World War I started, as the events of the Battle of the Somme unfolded as well as the tragic love story of a young British-French couple that had met in Amiens (North France) years before the war and would be marked by the violent and tragic developments of the years 1916-18 for their entire life.
Post a comment
Read more 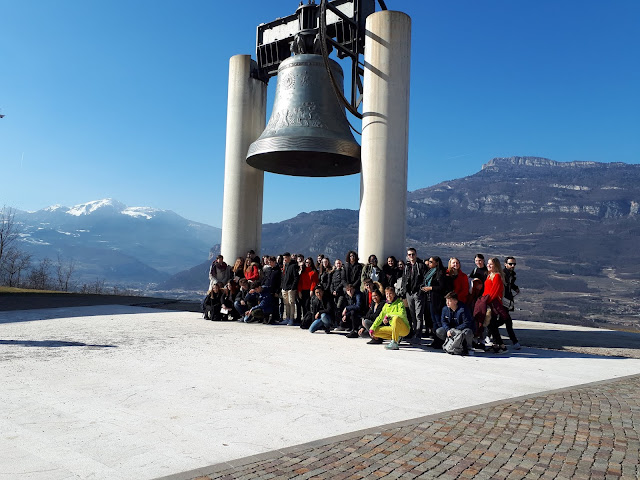 During our trip to Reggio Emilia in February 2019 we visited the Great War Museum at Rovereto and found out that the Alpine front was very close to the Lake Garda. Today this historic deathbed of thousands of soldiers has been transformed into a walk, that is perpetrated by tourists commemorating the events of that period. It is called the "Sentiero della Pace" (peace trail). We also had two exciting trips to Parma and Bologna. The photos of that exchange week can be viewed following the link below: Photo Journal: Reggio Emilia (17th - 23th February)   The pupils have collected some of the memories of that week which can be read below (in German) Sonntag,17.02.2019 Am Sonntag ging es um kurz nach Acht bei strahlendem Sonnenschein los nach Italien. Unser Busfahrer Willi sagte uns eine ungefähre Ankunftszeit von 16 Uhr voraus. Im großen Reisebus hatten alle genügend Platz, um es sich gemütlich zu machen.  Nach einer flüssigen Fahrt machten wir eine län
Post a comment
Read more
More posts 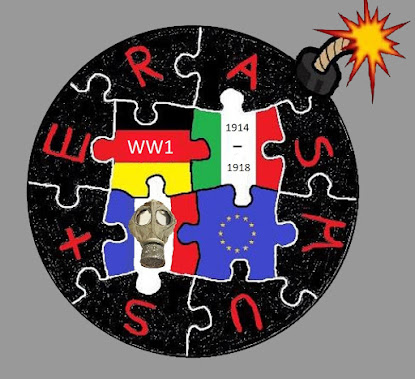 To Hell and Back - Germany, Italy and France at the end of the "Great War" - a European Exhibition

Getting to know our Erasmus+-Projects